Just about everyone who likes to play card games is familiar with the more popular forms of poker out there: your Texas Hold ‘Ems and your five card stud and the like. These games have rocketed to popularity over the last decade or so, and have been elevated to cultural iconic status in the current zeitgeist of modern gaming.

Yes, these games are well known, but what most people out there might not be aware of is the fact that poker is really an umbrella term for a whole family of games including everyone’s beloved Texas Hold ‘Em. Take a little jaunt off the beaten path and try your hand at Omaha, HORSE Poker, Razz, Crazy Pineapple or Badugi. Get out of your comfort zone and give Cold Omaha, Royal Hold ‘Em, Omaha Hi-Lo or HO Poker a try.

An exotic form of poker, pai gow borrows its name from the old Chinese domino game. Just like the more traditional versions of poker, pai gow is played with a regulation 52-card deck, but a major difference between it and other forms is that pai gow’s deck also involves a joker card.

This basically means that though the values of the hands remain the same as in standard poker, the style of play resembles that of a game like blackjack. You can’t bluff in blackjack, not really, and you can’t bluff in pai gow. Now, on to how to play the game.

How to play Pai Gow Poker

Pai gow is set up for a dealer to deal to a maximum of six players, all of whom are playing the dealer. The object for the player is to create two hands out of the seven cards he or she will be dealt. One hand must be the best of five of the cards, and the other must be the best of the remaining two cards. 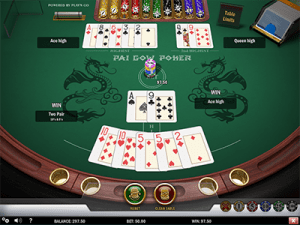 When it comes to the rules of pai gow, the five card hand’s rank must surpass the rank of the two-card hand. It is because of this rule that the two-card hand is given many handles: “in front” hand, “on top” hand, “hair” hand, “small” hand, “minor” hand or even the most obvious moniker, “low” hand.

The five-card hand is also labelled with many aliases, some of which include the “bottom” hand, the “behind” hand or the “big” hand. The reason it is sometimes called the behind hand is because they are placed behind the two-card hand.

Once the group of people is ready to play, the dealer deals the cards out to the players in piles of seven, and all of the cards will be face down. No matter the amount of people playing, there will always be four unused cards in a game of pai gow.

Once the cards are dealt, the players will be assigned betting positions from one to seven, and these start with whichever player acts as the banker for the current round of play, and then going counter clockwise in number of position. One common method of assigning the betting positions is to roll three standard, six-sided dice.

Another interesting facet of pai gow is that even if there is an empty spot on the six person betting table, a hand is still dealt to that position and then placed in a discard pile along with the four unused cards. So in case you were wondering why there will always be four unused cards in a game, that is why. Seven times seven equals 49. When you include the fact that there is always a joker card in the deal, then that makes a total deck of 53 cards. Therefore, 53 minus 49 equals four. Simple as that.

There are some variations of this method, however. For instance, in some Vegas casinos, a hand known as a “dragon hand” is dealt to the vacant seat. This is also a seven card hand, but once every player has received their own hand, they have the added option of betting on the dragon hand. This bet can encompass any amount from the game minimum up to what he or she wagered on his or her own hand.

This is a first come, first serve situation, so the first player to bet on the dragon hand is the one who receives it, and what ends up happening is that player is essentially betting on two different hands. For casinos who implement this method of playing pai gow, there are different strategies for how to handle the way it is played because certain factors, the main one being that the player has already seen seven cards in his or her own hand, will affect the way that player bets.

As for the hand values, they are all exactly the same; a royal flush beats a straight flush, which beats a four-of-a-kind, which beats a flush, etc., etc., except for one main difference. In many casinos in Nevada, an ace low straight, or an ace, a two, a three, a four and a five will beat a king high straight, or a nine, a ten, a jack, a queen and a king. However, in casinos in California or Michigan, for example, the ace-low straight remains the lowest straight in the game.

As for the joker card, it serves as what is known as a “bug.” This means that it can be employed to complete either a flush or a straight in the five-card hand, but in all other scenarios, it serves as an ace, even in the two-card hand.