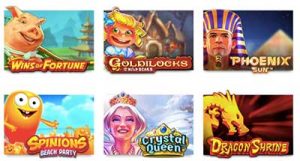 The UK media has turned its attention to online casino software providers, which use fairy tales and storybook characters in their games.

The Sunday Times has published an investigation into online casino software developers, claiming they are flouting regulatory rules to target minors.

Online slots usually feature a range of cartoon graphics, however, table games, like roulette and blackjack, found at UK online casinos can have storybook themes too.

While Slots Million online casino features more than 900 online slots with a range of cartoon graphics, the Times has argued that these types of themes are exclusive to children.

The UK national newspaper also argued that since some of these games can be played for free without age verification checks, the operators are attempting to lure minors to gamble.

But minors are blocked via the age verification checks when trying to create a real money account.

While the Advertising Standards Agency said it would be investigating the claim that operators are targeting vulnerable people, many have said it is a waste of time.

Global Betting and Gaming Consultants (GBGC), Director Warwick Bartlett said that gambling companies spend a lot of time and money on advertising, and deliberately targeting customers which cannot create a real money account is not one of their goals.

“Advertising is expensive, and gambling companies measure the return of every advert that is placed against new accounts vs cost, known in the trade as customer acquisition cost,” he said.

He added that cartoon characters are used instead of real people as it saves the developers’ money.

“Oh, and by the way, they do not only appeal to children, adults like them too,” Mr Bartlett said.

“On a flight back from Las Vegas I walked down the aisle of the plane and saw thirty percent of adults watching the latest hit cartoon film Despicable Me.”

A 2014 study found that one in five adults in the UK still enjoy watching cartoons, while mental health experts have recommended adults watch cartoons to de-stress.

These facts may be another reason why online casino games which mirror popular cartoons, including the Spinions Beach Party by QuickSpin at Slots Million, are so popular among adult gamblers.

Additionally, the online poker tournament site, PokerStars, recently launched its Power Up game, which features video game components including having the ability to create a character with different powers. While the game has been removed temporarily due to a bug, there are plans to get it back up and running as soon as possible.

The UK Gambling Commission has also responded to the newspaper’s investigation, sending an open letter to the Editor.

“Protecting children from being harmed or exploited by gambling is a clear priority for the Gambling Commission,” it says.

“Where businesses fail to protect vulnerable people, especially children, we have and will continue to take firm action.”

The gambling regulator released a study last year revealing around six percent of 11 to 15-year-olds have gambled online using their parents’ accounts.

It’s not clear if these kids gambled on games featuring cartoons from storybooks, or if they would’ve gambled anyway.

Additionally, the study also found that the rate of gambling among young children has remained static over the past decade.

Industry expert and gambling consultant, Steve Donoughue, said that while sites allow people to play for free, once you start playing for real money, verification checks prevent children from playing.

“So will they become addicts if they play for free? Probably not because children have been playing gambling style games for centuries and still less than 1% get a problem,” he said.

“But what about the adults that let their kids play using their accounts? That would be a parenting issue, where are the failed politicians making a fuss about that?”

He added that the idea cartoon characters in games are luring children to online gambling “is nonsense and The Times should know better.”

Cartoons aren’t just for kids – there are plenty of cartoons on television which are for adults only including Family Guy and American Dad. Even fairytales like Beauty and the Beast and the Lion King are loved by those over the age of 18.

If you’re one of the many adults who enjoy cartoon graphics, players from United States should head to Slots.lv.